Stories about Brewing Beer at the Stations

Beer has been brewed at the Antarctic stations for many years; sending commercially packaged beer down south takes up valuable cargo space, thus it is more efficient to send limited quantities and brew the majority on-station.

In the past, the homers was made from the basic ingredients - yeast, a starter from previous brews, malt and the usual ingredients.  Nowadays, commercial home brew kits are used.

Bottling nights are a social event at the stations and many people, including non-drinkers attend.

Here are some stories about brewing beer at the stations. 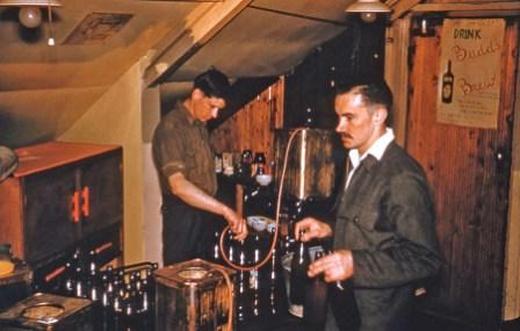 Bottling Home Brew, Biscoe Hut Mawson. Photo by Grahame Budd
I had brought the recipe from Heard Island, where in 1954 it had been known as ‘Azorella juice’.  But my grateful patients at Mawson had produced the poster seen on the door, which celebrated its virtues and ended with the punch-line “Your doctor will tell you - it’s good for you!”

The figures, left to right, are ionospherics physicist Ross Dunlop and senior meteorologist Ian Widdows, who earlier in the year had had a retrocaecal appendix removed while lying on one of the mess tables and (being a tall sort of chap) the sewing machine.

My most popular medical decision of the year was when exploding homebrew bottles on a shelf in the kitchen had obliged me to declare a Public Health Emergency, requiring that the hazard be removed forthwith by emptying the bottles in an appropriate manner. 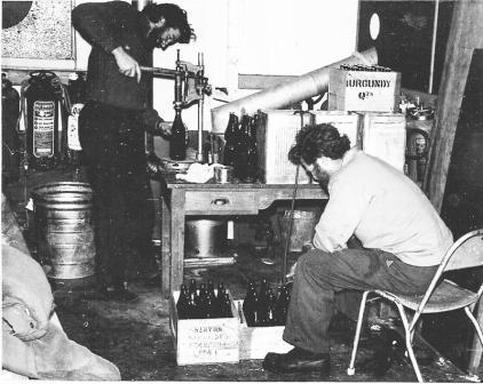