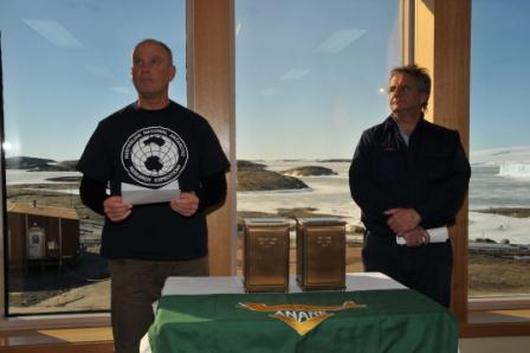 A lengthy fly off (34 nautical miles) due to heavy ice conditions and subsequent poor weather with several days of high winds and zero visibility hampered the ability to easily transport people and goods to and from the Aurora Australis to Mawson. V3 was the last ship into Mawson this season, and fortunately the majority of the resupply has been achieved.

Phil and Nel Laws ashes were also safely delivered and yesterday (5th March 2011) a small ceremony was held at Mawson with the ANARE Club rep Margaret Whitelaw in attendance. The formal interment did not occur due to time and weather constraints, and will be held by the Mawson wintering crew in the near future.

‘...the setting was particularly beautiful, the urns sat on a table in the bay window of the upstairs lounge area with sunlight streaming into the room, wonderful views out of the windows and Alice playing her harp to one side. The urns were sitting on the ANARE flag which was draped across a white tablecloth and the urns were covered by our small Australian flag

Jim Milne read the prepared welcome and then Jim and Mark Williams ceremoniously folded the Australian flag and put it to one side while Alice played the Antarctic piece written for her trip to Antarctica. I then said the prayer and read the Eulogy as prepared by you Ray, Mark then read the passage from Phil's will as a Eulogy for Nel. To finish off I read the contents of our plaque and the Ceremony  ended with Alice playing Dark Eyes.

The final interment prayer is to be said by Mark as the urns are placed into the cairn, at some future time possibly Midwinter, and all the winterers will complete the stone placement at that time...’
Margaret Whitelaw
posted 6/3/2011 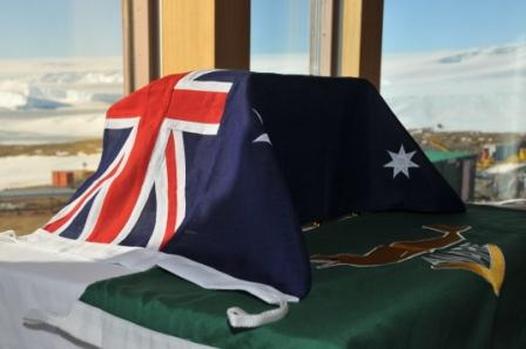