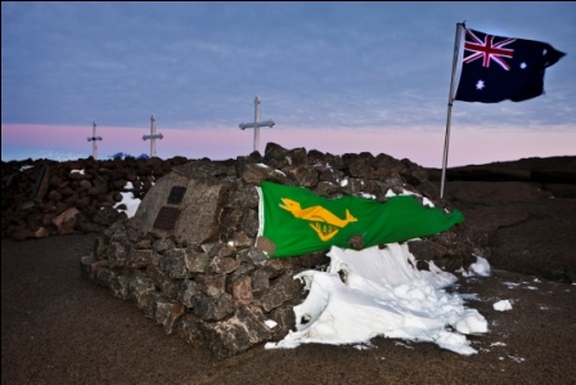 Hi All,
I received the following email from Mark Williams, the Mawson station leader tonight.
I am at the AAD tomorrow and will contact Mawson directly and convey the personal thanks of the ANARE Club. I also will forward on any further information on the planned media release via email and the national website as soon as I am advised.
From the attached pictures (see below) it appears that both Phil and Nel had a final tour of Mawson, including the old station, before being placed in the truly impressive cairn. Our ANARE flag was draped over the cairn while the Australian flag was raised on a nearby flagpole.
Ingrid

On Sunday 19 June we interred the ashes of Phil and Nell Law in a cairn on West Arm overlooking Horseshoe Harbour.  It was a lovely day with light winds and a stunning twilight.  I have enclosed some photos for you.

The service was filmed by the MBC crew and stills were taken by Chris Wilson and Ian Phillips.

It was a whole of station affair and the urns were placed by Tim Kerr and David Morrison.

The footage and high resolution photos will be uploaded to Nisha and I understand the AAD will produce a press release.

I hope this will be a nice memorial and great memory for all ANARE members.

It was an honour for the Mawson wintering expeditioners to take part in the ceremony. 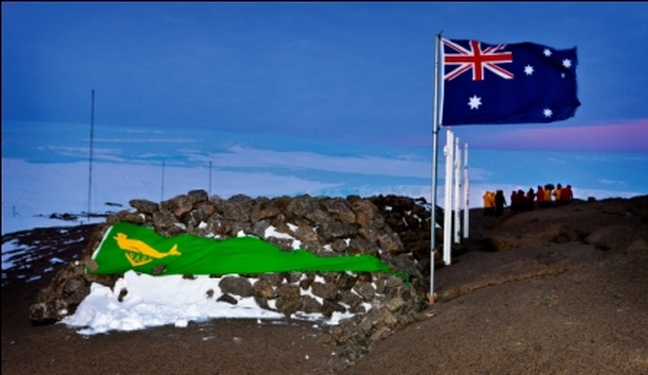 Unfortunately it seems that not all ABC states carried the news of the interment of Phil Law. The Tasmanian news complete with interview with AAD director Lyn Maddock can be accessed on the ABC website.

Sincere thanks to the Mawson expeditioners and the Australian Antarctic Division. As seen from the video, the interment ceremony was perfect...absolutely perfect.
Many thanks...