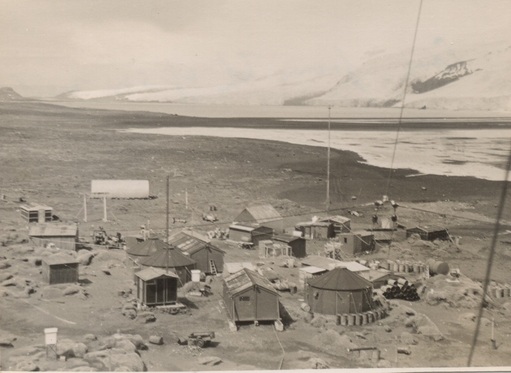 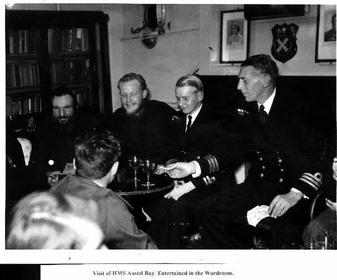 The wardroom onboard the HMS Austel Bay. Photographer unknown.
The photo was taken in 1950 on board the destroyer (Frigate?) HMS Austel Bay which had visited NZ & was on it’s way back to UK. The HMS Austel had dropped into Macquarie Island bringing much needed supplies. Myself being an old salt from WW2 was quite impressed and accepted accordingly.

I am the 2nd on the left. On my right is Cyril Park ,our Engineer, who I think was the son of the Lord Mayor of Hobart at that time but now Cyril is passed on. On my left is the CEO & next to him is the Commanding Officer , ‘Skipper’.( Commander).

The person with his back to us is Jack Windsor, our Senior met. man who unfortunately passed away in January 1951 from peritonitis after an operation by our Doctor Kostos Kalnenas who performed an appendectomy. (The appendix had burst) He is buried on the top of Wireless Hill near Mawson’s old antenna site. Of the Met team I am now the only surviving person (four out of 14 members in the team).

The French ship’ ‘Commandant Charcot’ was 400 miles west of us enroute to their Adelie land Base but they decided to call in to see us and see if they could be of any assistance but unfortunately they could not help Jack as he was beyond any help. This was the beginning that all future expeditioners must have their appendix removed before going down south. John Windsors name is on the plaque in St. Pauls Cathedral in Melbourne alongside my old ship HMAS Australia.
Trevior Boyd 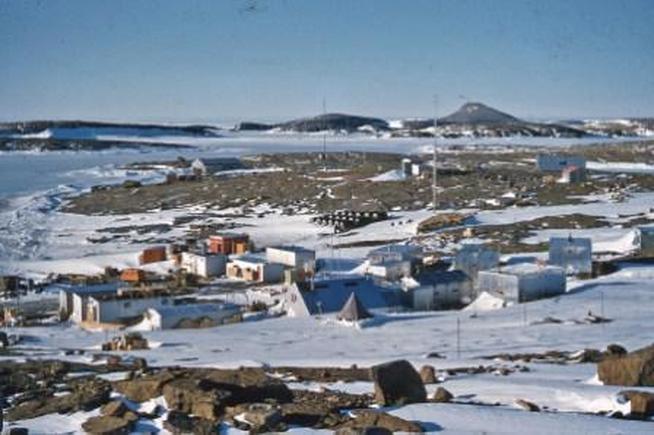 A location shot, looking north-east.  Biscoe hut is behind the pyramid tent, aircraft hangar in the far background.
Grahame Budd. 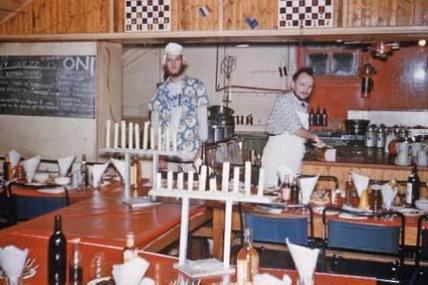 Looking west from the mess into the kitchen area, with the mess tables rearranged for the occasion. The figures, left to right, are Allen Sawert (radio operator and slushy) and Paul Teyssier (cook).  Above their heads are the chess boards recording the state of play in our games with the Russians at Mirny and the French at Kerguelen.  The notice on the blackboard says that ‘Fancy dress is ON’.
Grahame Budd. 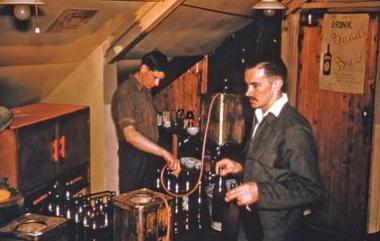 I had brought the recipe from Heard Island, where in 1954 it had been known as ‘Azorella juice’.  But my grateful patients at Mawson had produced the poster seen on the door, which celebrated its virtues and ended with the punch-line “Your doctor will tell you - it’s good for you!”  The figures, left to right, are ionospherics physicist Ross Dunlop and senior meteorologist Ian Widdows, who earlier in the year had had a retrocaecal appendix removed while lying on one of the mess tables and (being a tall sort of chap) the sewing machine.  My most popular medical decision of the year was when exploding homebrew bottles on a shelf in the kitchen had obliged me to declare a Public Health Emergency, requiring that the hazard be removed forthwith by emptying the bottles in an appropriate manner.  Compliance, I’m happy to report, was 100%.
Grahame Budd. 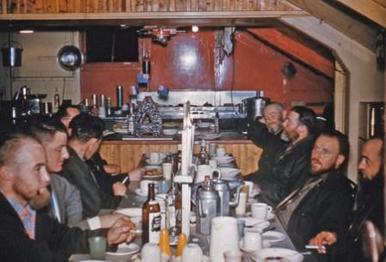 Allen’s birthday dinner – for radio operator Allen Sawert.  Note the ‘A’ shaped cake on the sideboard at the head of the table.  Looking west along one of the two mess tables to the kitchen and washing up area.  At the far right of the table is OIC John Bechervaise, who always wrote and read out a poem for the birthday boy, affectionately celebrating his virtues and his foibles.
Grahame Budd 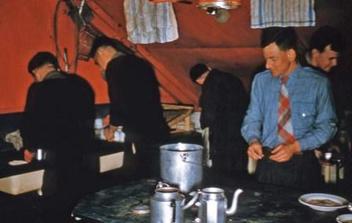 Washing up, at the north-west end of the hut.  The two figures at left are washing up, the one in the blue shirt facing the camera is Squadron Leader Jim Sandercock, who in December that year won an Air Force Cross for his gallant attempts to save our two De Havilland Beaver aircraft when both were wrecked by a gale on the plateau airstrip.
Grahame Budd