COPY OF DEPARTURE SPEECH BY RAY MCMAHON
Today the AURORA AUSTRALIS prepares to leave Hobart on its annual voyage to Antarctica, travelling on board I suspect will be a group of excited young men and women, some of whom will spend the following year at Mawson Station.

I would like to reflect on a similar voyage that too place some 57 years ago. It was ion the 4th of January 1954 when a group of young men set sail aboard the KISTA DAN on an adventure that would take them to the shores of the Antarctic Continent, a far away place of unknown mysteries, excitement and imminent dangers.

Also aboard the KISTA DAN was Phillip Garth Law the Director of ANARE and voyage expedition leader .This voyage was the culmination of his vision for Australia to create a permanent presence on the Antarctic Continent with the establishment of a scientific research station.

On Tuesday the 2nd of February 1954 after nearly a month on the high seas, a lookout high in the crow’s nest of the KISTA DAN sighted mountain ranges on the horizon. There appeared to be clear water between the pack-ice and these mountains and Phillip Law was elated as he is recorded as saying, “ There is nothing to stop us now in our endeavours”.
Over the next few days the KISTA DAN broke her way through heavy seaice to land a party on the rocky shore of the Antarctic Continent , and the work to build a research station began. It was on Saturday the 13th of February 1954, Phillip Law held an official flag-raising ceremony proclaiming the site to be called MAWSON station, in honour of the great Australian explorer and scientist Sir Douglas Mawson.

Just 12 months ago in February 2010, Dr Phillip Law died at the age of 97 years. He had recorded in his Last Will that his cremated remains be interred alongside those of his wife Nel, beneath a stone cairn on the west arm of Horseshoe Harbour across the harbour from Mawson Station.

Today we have the opportunity to honour his request:
On behalf of Dr Phillip Garth Law’s family, his friends and colleagues and in particular the members of the ANARE Club of which he was Patron, I would like to thank Lynn Maddock the Director of the Australian Antarctic Division represented here today by Mr Rob Wooding and the staff of the AAD here in Hobart and at Mawson Station for making this interment ceremony possible.

I appreciate the privilege offered me in transferring these urns containing the ashes of Dr Phillip Garth Law and his wife Nel Law into the safe custody of Master of the Aurora Australis CaptainScott ,the Voyage Leader Andy Chianci , the ingoing Station Leader Mark Williams, and Dr Margaret Whitelaw the ANARE Club’s representative, to be taken on board the AURORA AUSTRALIS for the voyage to their final resting place at Mawson Station in Antarctica.

ALSO AN  ARTICLE IN THE MERCURY BY DAVID KILLICK. 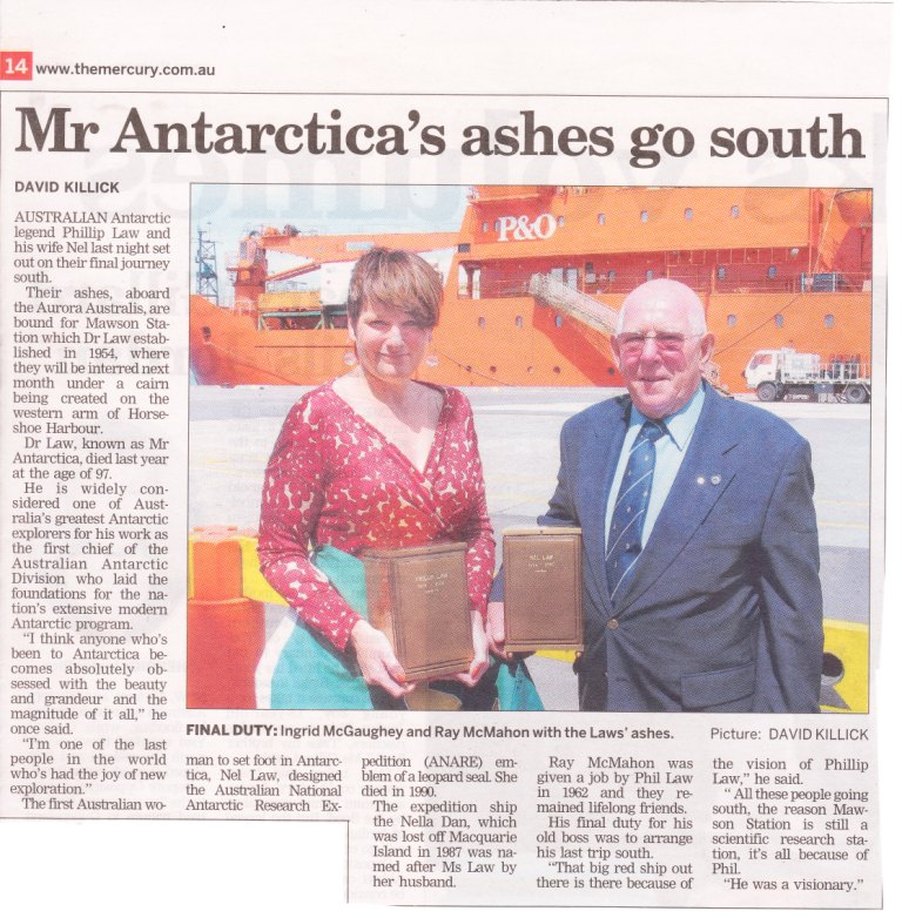