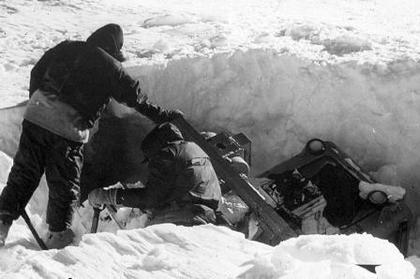 ....Then with a roar the bridge collapsed and down it went by the nose to be tenuously help by a small lump on the wall of the crevasse which kicked the machine out of a vertical nose down situation into one where the rear of the machine jammed against the opposite wall.  The nose of tractor was some  5 metres below the surface...

Henk briefly continued his downward path (that's right - he didn't need a full harness seat belt like the rest of us wusses) until it was arrested by the windscreen and he was able to absorb the force of his fall with his face.  He was very fortunate to have taken the impact on his head rather than, say, his shin, because I'm sure the latter would have hurt him considerably.

Doug Machin, who was standing beside me when the contretemps arose swears that I muttered "Well, that's Henk gone" but I have no recollection of it.

Anyway, first we went down the hole to secure Henk, (who was not entirely lucid at this point) on an ice axe belay and get him out of the cabin and up to the surface. We then had to satisfy ourselves that his faculties are not markedly diminished, urge him to have a nice cup of tea and to remain in the caravan and apply himself to devising recovery stratagems rather than help us.

Next, dig a hydrogen bottle (empty one being thought advisable as the wire rope passing over it might spark - unlikely to be a problem but then we, and particularly Nev. and I are complete "shirleys" (as in temple) and have been keen observers of the "A factor" at work for a goodish while, to prevent it cutting back into the lip.

Then sink another gas bottle 1 metre and a half deep back about 10 metres from the crevasse edge to serve as a deadman, and then swing down under the nose of the tractor (with some degree of trepidation) to attach the cable to the front pintle hook, then secure the deadman end of the cable, via a chain block, and voila she can fall no further. 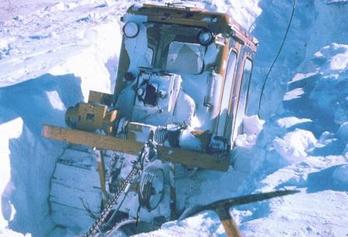 Decide that Henk's hugely dilated eyes are far more likely, in his case, to be symptomatic of shock than brain injury, encourage him to stay inside, keep warm, have plenty of hot drinks and continue working on stratagems.

Commence digging a sloping channel on the side of the crevasse opposite the secured nose, tractor plus a bit wide, down towards the crevasse side just above the level of the tractor nose and leaving a column of ice half a metre or so thick at the crevasse edge to support the back of the tractor.

Have lots of cups of tea, drop the last axe and a shovel down the crevasse.

Finally the tractor slowly takes up, following plenty of cups of tea and discussions of stratagems with Henk, a hanging position sloping across the crevasse with the rear of its tracks on the ice ramp and the front hanging on the front pintle hook.  Slowly, thoughtfully, calmly pull rearwards on the rear chain block while easing off on the forward one to pull the tractor across the hole and up the ramp.  Ignore the gay repartee, such as "Collins you idiot bastard, STOP" or Kirkby you #$%@*&^+ you'll bloody kill the lot of us"; it is merely a sign of the affectionate and merrily chaffing relationship which expeditioners so enjoy, particularly under stress.

And after nearly 4 days she stands at plateau level.  Have a big cup of tea.

Its over 2000 meters up and early October and bloody insanity to be there then, at all.  The temp's never above -50c, mostly below -60c, yet we are seriously happy little chaps.

But how do you start a tractor which has been hanging on its nose, freezing its little nuts (and bolts, too) off for four days? Oil seeping, before it chilled to a firm vaseline consistency, to every little place oil shouldn't seep.  Even after excavating the accessible oil the tracks can't be moved a centimetre when towed by the other tractor (easily got out just with chain blocks, way back when) because of the residual solid oil in the transmission.  Heat has to be the answer.  But from where in those non Herman Nelson days?

From Gringo, that's where.  He made up a huge, petrol fueled blow lamp from a soda acid fire extinguisher and after licking a metre long flame over the couple of tonnes or so of engine for a day soaked into it enough " warmth", for want of a better term, to allow the auxilliary engine to be started and then the main engine.  Then a day of blowlamp and engine heat and the transmission can be forced into yielding a few centimetres at a time.

Have a cup of tea, because we are clever little chaps who deserve it.

Suggest to Henk that he must be exhausted and needs relief from driving duties.  But mostly be very very thankful there are blokes like Gringo about the place.  And 50 years later wonder at the boundless good fortune which allowed you to share such endeavours with such blokes.  And, while we who were there can and certainly will continue to have our bit of fun at Henk's expense it would be unwise for anyone else to do so.